Some Photos from My 50th Birthday Disney Trip

I'm not in a very talkative mood right now.  But I told myself I was going to make photo posts from my trip, and I feel if I don't do it now, I'll end up never doing it.  Then I'll feel I took an excessive amount of photos for no reason.

I was originally going to make multiple posts with lots of photos.  I think instead I'm going to do this one post. 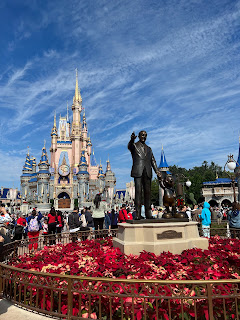 All in all, I had a really good time.
I'm hoping we will still be able to take whole-family trips to Disney World or Disneyland. But I think there will also be more solo Disney trips for each of us. Jack took one last summer. I took this one. Tim is going in February.
I tend to have post-Disney-trip regrets.
My only one this time was that it seemed to be a birthday trip only inside my own head.  I don't think anyone else got the memo.
No, I wasn't there exactly on my 50th birthday. I came home three days before...the reason being I didn't want to be there during the Thanksgiving week. But I had talked about it, and seen it, as being my birthday trip.
The only time my birthday was mentioned, though, was by the TSA agent, at the airport, just before I went through security. He noticed the date on my ID and wished me a happy birthday. I was delighted and imagined it would be the first of multiple mentions of my birthday on the trip. But it actually ended up being the last.
I didn't want any big surprises or an excessive amount of attention. I guess I would have wanted just a small acknowledgment. Like a text: Hope you're enjoying your birthday trip!  Or a commemorative photo.
I briefly considered...maybe longed for...one of those celebration buttons. But I feared that would lead to awkward, embarrassing, and/or lonely moments.
Note: I did get several birthday wishes on my actual birthday from family, friends, and relatives. I appreciate that.
I think the mistake I made is depending on others to acknowledge that my Disney trip was a birthday trip. I should have done something myself to acknowledge it— bought myself a special birthday souvenir or labeled one of the many Disney treats I ate as a birthday treat.
In the end, though...being there was a gift in itself. And another gift is the prospect of future trips.
Next time I go, whether alone or with others, I'm going to make a point of labeling something I do or eat as a birthday thing. Even if it's months away from my birthday.
(I guess I ended up being talkative, after all.  If anyone is surprised about that...they're either new here or haven't been paying enough attention)
at November 23, 2022

The Dead Are Online