If someone suggests we have said something racist and we respond by telling them that they have hurt our feelings with the accusation, this is not evidence against us being racist. It's just evidence towards the fact that we can't handle criticism and also maybe that we're avoidant and manipulative.

If someone accuses us of sexual assault, talking about how this accusation has cost our family, and our friends does not prove we are innocent of sexual assault.  It just shows we are capable of using those who love us as manipulation tools.

I think it's sometimes easier to gel with these concepts when we believe accusations and when the accused belongs to the opposite political viewpoint or the opposite whatever-viewpoint.

Sometimes it comes from our own side.

And sometimes it comes with accusations we don't actually believe.

It happened for me yesterday.

Tim and I watched the quite-didactic series Debunking Borat.

I think one of the main problem with the program is the episodes are too short.  They're about six minutes, and part of the time is dedicated to an intro that is too long in proportion to the size of the episode. Another portion is spent on flashy montages to show off the credentials of the experts. Not much time was spent on actual debunking.

The show would have been better if each episode was at least 30 minutes.  I think more time is needed to debunk conspiracy theories.  You need more time to show both A) the opposing evidence against the theory B) the origins of the conspiracy theory.  The show did a little bit of this. But little is the key word here.

The show seemed to think that they could get conspiracy theorists on their side by using bubbly friendliness and impressive credentials.

Anyway....I wasn't impressed with any of the episodes.  But the one that annoyed me the most was the last.

In this episode, they deal with the conspiracy theory that Hilary Clinton drinks the blood of children. 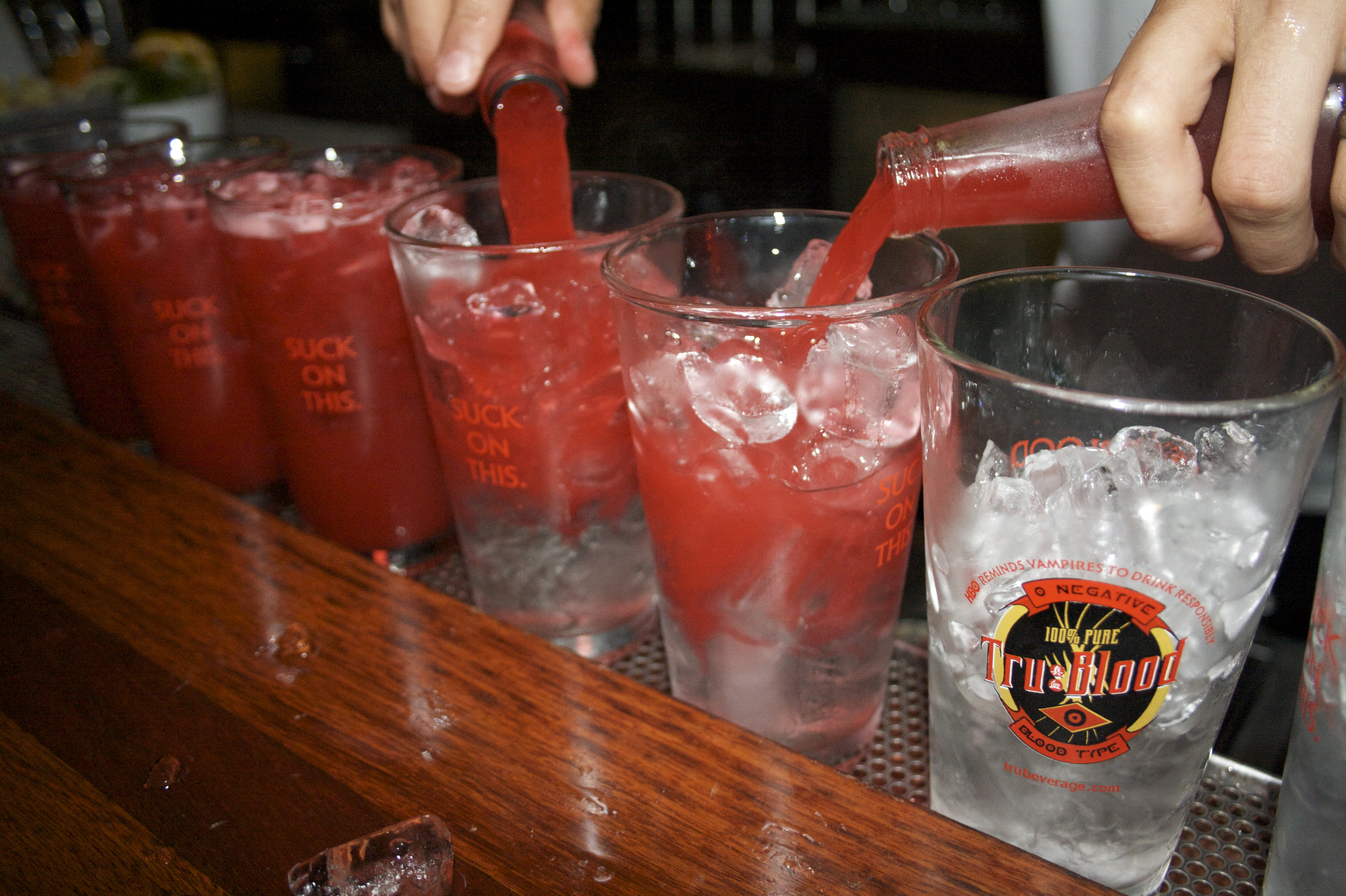 The episode talked a bit about the blood libel trope. And I think that was supposed to be part of their defense.  But I thought that was a bit confusing, since the trope is known for being against Jews, and Clinton isn't Jewish.

But anyway...Clinton provided a taped defense/debunking to Russell and Holleman. Her main message?  The rumors hurt her feelings and also hurt her friends, families, and coworkers.

Okay. That in no way gives any evidence towards Clinton being innocent of blood-drinking.

I thought it actually made her look guilty.

I'm pretty sure she's NOT guilty of blood-drinking. But after watching her defense, I'm more open to the idea than I ever was before watching the Borat special.

Note about the photo used: It comes from a True Blood  fan Flickr account via Wiki Commons.  If you were/are a fan of True Blood, you might enjoy their other photos.

Actually now that I look at the photos, I realize the photo I chose was somewhat inappropriate. One of the main plot points of the show is that vampires stopped needing real human blood, because a Japanese company invented an artificial alternative.

Really. Instead of using energy on debunking rumors of political and Hollywood elites drinking blood, maybe we should be working on coming up with viable alternatives to human-blood-products.  You know....just in case.

Popular posts from this blog

September 24, 2018
Lately I've been looking at the search statistics for my blog. The main reason people drop by? They want to learn more about dropping one's bucket in the dirt, something I first heard about while watching  Offspring . I wonder if everyone who Googles the bucket/dirt thing heard it on  Offspring. Or has it been mentioned elsewhere? Either way...it's quite disheartening. For a fantastic blog about Disney World, Star Wars, DC Comic characters, Doctor Who, and other exciting stuff...visit  Dog Food For Chairs.  Other things that bring people to my blog: Geoff Paine married, Ben Mortley, Danny Raco's wife. Who is Danny Raco? I don't even know...much less his wife. Okay. I just Googled. He's an actor. My blog is listed on the first page. But just by glancing at the Google entry, I can see that I really didn't talk about his wife. It's just I mentioned both Danny Raco and "wife" in the same post. To learn about introverted pick up
Read more

April 27, 2021
After a lot of reading, thinking, learning, soul-searching , and online testing, I've decided I'm Autistic.  I'm sure not everyone will agree with me.  But...such is life. I started online texting therapy. And what sucks about that is, I was in a happy-place when I started, and now I'm less happy, because I realized some painful truths. When I was young, I felt no one truly loved me. I felt people loved me only out of obligation. Even in my dreams, I felt unloved. I had really low self-esteem most of the time. In the past few years, I have believed that my self-esteem had totally improved.  What I felt, though, was along the lines of:  I like me, but most other people don't like me.   I almost always feel that people dislike me...the exception being is if I hide myself and just act like a supporter, cheerleader, confidant, etc. Even writing this post, I imagine people reading and rolling their eyes. And that's the feeling I usually have when writing blog posts.
5 comments
Read more

May 23, 2009
I need to take a break. I'm a bit of a mess right now. I have posted all the posts I've been working on this past week....so that should keep you guys busy for awhile. Just scroll below to find them...There's Judy Davis , Frank Brennan , Van Tuon Nguyen , Helen Reddy , and my favorite... Julian Burnside . I'll still probably be around to respond to comments. I'm just not up to researching and writing right now. Sorry.
29 comments
Read more

May 16, 2010
Melina Marchetta is another author. I've read two of her young adult novels; Looking For Alibrandi and Saving Francesca . I think Alibrandi is the more well known one. I liked it, but I liked the Francesca one better. I get them both confused, though. I wonder if Marchetta has written any other novels. Well, I guess I shall find out today. Wait. Lord Wiki just showed me Marchetta's bibliography. I may have read three of her books. I think I read Jellicoe Road . I remember I got the name wrong, though, and thought it was Jelly Road . No. Never mind. Wrong book. I went to find my old post. I was thinking of Leaving Jetty Road . I mistook that title for Leaving Jelly Road. Lord Wiki says baby Melina was born in Sydney, on 25 March 1965. Like me, she's the middle child in a family of three daughters. We're like the Charmed Ones. Although the Charmed Ones really had four sisters. Marchetta is Italian-Australian. That makes sens
Post a Comment
Read more

February 12, 2016
1. Saw, from Statcounter, that more people than usual are going to my Geoff Paine post. I Googled to see what was up with that—hoping something bad hadn't happened to him. Fortunately, it seems all is okay. I think there's interest in Paine because he recently guest-starred on The Doctor Blake Mysteries . 2. Saw that Paine played Noel Foster. There's also a Valerie Foster on the episode, and she's played by Diana Glen. Another name I recognize in the credits is Robert van Mackelenberg. I've been watching Mackelenberg lately in Wicked Science .  He plays the science teacher. In the episode yesterday, he was fired...by a clone of the school principal. 3.  Saw that Anna McGahan guest-starred in this episode, and her character has also appeared in another episode. I wonder if she'll be in more. Oh! And Rodger Corser is in the episode too. I recognize a lot of names in the credits of the episode. It's just I don't know who's a regular
Read more

Synchronocity Leads Me to Bonding With 2011-Me

July 23, 2021
Last night I had a dream that involved a discussion about how some Australian people sound more British to me than Australian. Then...this morning I started reading an old blog post of mine. Okay. Detour here.  Because of annoying changes on Blogger, I had to change my already somewhat complicated way of choosing which blog post to read. So now what I do is look at the stats for my most popular posts in the last 24 hours. I go to the 7th post...and if that one already has my new labels, I move to the 13th post. Well, I guess I should explain that my purpose in reading old blog posts is not just to reconnect with my past self but also to label or relabel old posts. If both the 7th and 13th post don't need to be labeled or relabled, I move to the NOW stats and do the 7th or 13th post there.  My blog isn't super popular, so sometimes the blog posts don't even go up to 7.  In that case, I just have a day off.  Anyway, my purpose of explaining this is to A) show my probable-auti
Post a Comment
Read more

July 25, 2021
While in the pool today, I had some thoughts. And the thoughts led me to imagining my family as Sims. I think from 2017-2019, it was like we were playing the pets expansion pack.  We all had pets before, but in those years, the pet thing kind of blew up. My parents adopted two dogs. We adopted Annie and Yeti One of my sister's family ended up with five dogs. Though they might have gotten the fifth dog during the pandemic.  I forget.   Anyway.... In 2020, we were supposed to install the university expansion pack. Jack and his cousin were starting  college. And we did play that. But it's like we unknowingly also installed two bonus expansion packs: Pandemic! and Disaster!  Our house was very damaged in the Texas winter storm.  Ever since then, I have felt weird. I guess life has felt less real to me?   It feels sort of like I'm in a long dream, or we're all living in a movie.   Another analogy I came up with is the end of the school year where you have classes but you'
Post a Comment
Read more

Dina Roberts
Hi! I'm really into TV shows and am wondering why Blogger asks for our favorite films, music, and books but not TV shows. Is Blogger anti-TV? I'm a 48 year-old Texan woman who gets obsessed with things. I've come to the realization that I'm probably autistic and I've learned a new term for my obsessions. Special interests. My latest special interest is Autism. My last major obsession was Australia. I've also been obsessed with Cystic Fibrosis, the movie Poltergeist, reincarnation, dreaming, neurofibromatosis, Apes, Judaism, Disney World, narcissism,...and other stuff. TV shows I've loved include Schitt's Creek, What We do in the Shadows, Lost, Offspring, Lucifer, and.... Coronation Street! Coronation Street is very important to me.