Around the same time that I downloaded the Dreaming App, I also downloaded a Symptom Tracker app.

I had downloaded about three or four before finding one made by someone named Adam Cziko.

The Cziko one works best for me, because there are (for now) seemingly unlimited symptoms and treatment slots.  Plus, you get to write in your own terms vs. choosing from a list.

I have some weird symptom, so I really did not like that some of the other apps tried to fit my weird symptoms into a neat little rigid box.  And/Or limited the number of symptoms I can list. Because I got lots.

My only worry about the Adam Cziko app is that it tells me to upload to premium for unlimited symptoms and treatments.  I'm open to uploading to premium.  But when I click on upgrade to Premium, I get this: 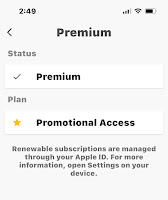 Popular posts from this blog

September 24, 2018
Lately I've been looking at the search statistics for my blog. The main reason people drop by? They want to learn more about dropping one's bucket in the dirt, something I first heard about while watching  Offspring . I wonder if everyone who Googles the bucket/dirt thing heard it on  Offspring. Or has it been mentioned elsewhere? Either way...it's quite disheartening. Other things that bring people to my blog: Geoff Paine married, Ben Mortley, Danny Raco's wife. Who is Danny Raco? I don't even know...much less his wife. Okay. I just Googled. He's an actor. My blog is listed on the first page. But just by glancing at the Google entry, I can see that I really didn't talk about his wife. It's just I mentioned both Danny Raco and "wife" in the same post. Basically it seems people come to my blog to learn about anal sex slag and to find out the relationship status of Aussie celebrities. And there are a lot of variations of th
Post a Comment
Read more

Narcissism and the Ableist Argument

March 06, 2020
Dear People Who Say It's Ableist to Complain about Narcissists, If you're going to speak out against people, like me, speaking out against narcissism.  If you're going to say that's ableism and not fair to people suffering from their narcissism disorder.... Well, guess what then. I'll just say I suffer from narcissism-intolerance. So you are being ableist by not being sensitive to the fact that I've been hurt by narcissism and want to talk about all that shit. Oh wait? You're saying it's unethical to call someone a narcissist when we don't know their diagnosis? No. It's wrong for a person to diagnose someone with NPD (narcissism personality disorder) without a professional degree that allows them to do such things.  But there is narcissism that exists outside the DSM-5. Narcissism is not just a mental disorder. It's also a noun and an adjective. It's a way that we can describe someone who has certa
5 comments
Read more

January 16, 2009
Margaret Whitlam is the wife of Gough Whitlam. She was a Prime Minister's Wife. Is she still alive? I think she is. I could be wrong. I read about Whitlam while researching Janette Howard. Susan Mitchell wrote and published a biography about Whitlam in which Whitlam said some negative things about Howard. It was very weird for me because I'm very much on the left. Whitlam is on the left, or at least her politician husband is. Janette's husband is best buddies with George W. Bush. This should mean I side with Whitlam over Howard. Right? But it didn't happen that way. I found myself disagreeing with Whitlam. I didn't like how she put Janette down for holding her husband's hand. I don't see the big deal in public hand holding. I think it's kind of sweet. I also didn't like how Whitlam criticized Howard for not being socially involved enough. Is a political spouse obligated to be involved with twenty different charit
5 comments
Read more

Thanks Or No Thanks To Tess McLeod, I Got a Mammogram

September 20, 2014
A few weeks ago, I watched Tess McLeod have a breast cancer scare on McLeod's Daughters . She felt a lump while taking a shower and completely freaked out because her mother died from breast cancer. She got pretty depressed and anxious about the whole thing but fortunately received decent support from her Drover's Run family. I think the show did a great job of showing the anxiety of medical testing, and it was realistic in showing that the process can be long and difficult. There's a lot of waiting. And there has been a study that shows waiting for a diagnosis is equally stressful to actually getting a cancer diagnosis. Tess ends up being lucky...for a day or two. She gets the cancer-free statement from the doctor. She's super happy. Her Drover's Run family is super happy. They decide to have a party to celebrate. On the way back from going into town to buy supplies, Tess and her sister Claire have a car issue that leads them dangling over a cliff. Tess got p
Post a Comment
Read more

May 20, 2022
I've started to read the Livejournals of people who were my Livejournal Friends from around 2005-2008. I've been reading MY journals for the past few years...bonding with my past selves. Then a few months ago, I started reading the comments from my Livejournal friends.  I realized I had forgotten most of what I had learned about their lives.  It made me feel self-centered and also worried that I had been self-centered back in the days when reading their journals.  Some of these people gave me so much support. I worried that I hadn't done the same for them.  I might have, though. Hopefully. Anyway, I think the mix of guilt and curiosity made me want to go back and read their journals...starting from the beginning of their journals.  I've seen a few comments so far from myself...in one of the journals which makes me feel better.   The main reason I'm probably not yet seeing comments from me in the other journals is I'm reading entries either written before I joine
Post a Comment
Read more

I Now Have the Official Autism Stamp

February 12, 2022
I got my diagnosis a few days ago. I'm autistic. And I have ADHD and OCD.   I wasn't surprised.  It's what I thought I had.  My feelings were more like relief that the psychologist agreed with me. I believe that I also have dyspraxia and anxiety.  So I'm kind of...disappointed that I didn't get those labels.  But I'm thinking it could be more like those fall into the experience of being autistic.   I had actually brought up OCD in the diagnostic interview.  I'm not sure what led me to do that. Oh...well, maybe she had mentioned looking into ADHD?  And I was thinking...wait, what about OCD?  She didn't give me a lot of pushback, but she said something like all autistic people have OCD.  It's like part of the package. But she asked/suggested if I perhaps had a bit extra OCD and emailed me another test to take.  She also sent me an additional ADHD test.  Wait. Maybe that's what happened? Maybe she told me she was going to send an ADHD test and then
6 comments
Read more

November 21, 2009
Abi Tucker is a singer and actress. I know she was on McLeod's Daughters . But she wasn't on the episodes we saw. I've seen a video of her on another soap opera type show. She's doing karaoke....singing Paul Kelly's "To Her Door." I don't think the video is available on YouTube anymore. I just looked. While I was there, I saw the TV show Tucker was on. It's Heartbreak High. Was she on anything else? A part of me thinks maybe she was on The Secret Life of Us . But I think I could be wrong about that. Oh! Actually I'm right. Lord Wiki says she was on The Secret Life of Us . Cool. I like being right. I mean I don't need to be right ALL the time; but it's nice if it happens every so often. Baby Abi was born 22 January 1973. She's a few days older than one of my brother-in-laws. Her career began in the early 1990's. She was on a show called New Faces . It was one of those talent search type things
6 comments
Read more

April 06, 2010
I have no idea who Jesse Spencer is, so this is fun. I love these mysteries. Is he an actor? Writer? Politician? Murderer? Well..... This Jesse Spencer is kind of handsome. He's a bit adorable. Lord Wiki has photographs of him. So while I do my research, I can sit here and stare. In all honesty, though, I only find him appealing in the top photo. The other photos don't excite me much. Spencer is on House . I've watched that a few times, so I may have seen him. He's also known for being Billy Kennedy on Neighbours . Spencer isn't a doctor. He just plays one on TV. But it looks like all his siblings are in the medical field...for real. One brother is an orthopaedic registrar. I've never heard of that. I'm thinking it's an Australian term. Well, I know it must have something to do with bones. I got that. Then the other brother is an oculoplastic surgeon. I had to look that up. It's a plastic surgeon wh
2 comments
Read more

August 22, 2014
This week I read Mira Grant's Parasite . It's a medical horror story and reading it inspired me to want to do another Australian medical researcher post. I looked at Lord Wiki's list, skimmed through the entries, and decided on Douglas Reye. Reye's Syndrome is named after him. I've heard of it. There are dire warnings on pediatric websites. Do not give your child aspirin if they have a fever! This could lead to Reye Syndrome! What is Reye Syndrome? I have no idea. Well, besides the fact that aspirin is involved. And maybe Chicken Pox? Anyway, that's why I chose to write about Douglas Reye. I figured it would lead to me learning about this Reye Syndrome. But first let's learn about Mr. Reye. Lord Wiki says he was born April 5, 1912 in Townsville. He died on Tim's tenth birthday.  He attended the University of Sydney.  He worked at the Royal Alexandra Hospital  Lord Wiki has a whole entry on Reye syndrome. I'm trying to
2 comments
Read more

June 06, 2012
Billie Proudman is stuck in New Zealand because of volcano ash. After beginning to watch episode eight of Offspring , I started to wonder about that.  If I was smarter, I would have probably started asking questions earlier. But I just took it as a plot thing. I realized finally that it's likely the actress (Kat Stewart) is busy with other things. We're seeing short glimpses of her on Skype or just hearing her voice on the mobile phone. I went to check IMDb, and saw Stewart is going to be starring in another TV show in 2013; Mr. and Mrs. Murder . Wait... IMDb says the show has been announced.   Does that mean it's not being filmed yet? Okay.  I just found this article.   It says they're not filming until September.    So what is Kat Stewart doing now? Why is Billie still stuck in New Zealand? Maybe it IS just a plot thing? (Spoiler warning)...... I'm guessing it's so Mick and the singing lady can have some romance and cause excessive t
6 comments
Read more